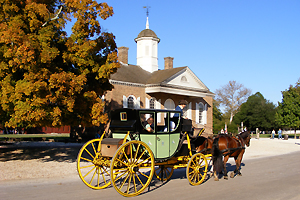 Click the links below to read detailed information and see pictures about these important sites. 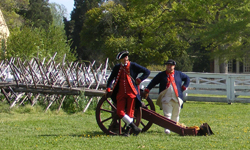 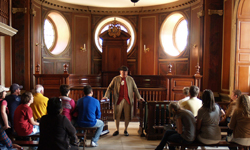 Visit Colonial Williamsburg and step back more than 220 years to the eve of the American Revolution. From 1699 to 1780, Williamsburg was the political and cultural center of Britain’s largest colony in the New World. In the shops, taverns, government buildings, homes and streets, George Washington, Thomas Jefferson, Patrick Henry, George Mason and other Virginia Patriots debated the ideas – liberty, independence and personal freedoms – that led to the founding of American democracy and inspired generations of Americans and others from around the world. Today, Colonial Williamsburg is the nation’s largest outdoor living history museum encompassing 301 acres including some 500 public buildings, homes, stores and taverns reconstructed and restored to their 18th-century appearances; tradesmen practicing 30 historic trades and domestic crafts; historical interpreters and character actors; and 90 acres of gardens and greens. Additional highlights include the Governor’s Palace; the Capitol; DeWitt Wallace Decorative Arts Museum, Abby Aldrich Rockefeller Folk Art Center and Bassett Hall. 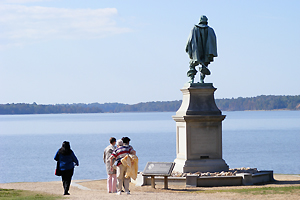 A National Park Service site, Historic Jamestowne offers a wealth of activities for exploring the first permanent English settlement in North America. Founded in May 1607, some 13 years before the Pilgrims arrived at Plymouth, Jamestown served as the capital of Virginia throughout the 17th century and saw the establishment of the language, customs, laws and government practiced in our nation today.

Share the moment of discovery with archaeologists as they uncover the original 1607 James Fort and see more than 1,000 artifacts at the Archaearium, an innovative new exhibition facility that also includes interactive exhibit areas that interpret the rediscovery process of archaeology. Overlooking the scenic James River, Historic Jamestowne also boasts the only remaining 17th-century above ground structure – the church tower – and reconstructed 17th-century Jamestown Memorial Church. At the Glasshouse, costumed glassblowers demonstrate one of the first industries attempted in English-speaking America using 17th-century tools and techniques. 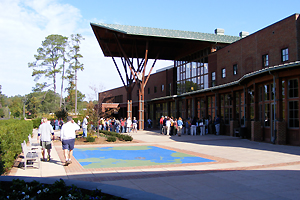 At Jamestown Settlement, comprehensive gallery exhibits describe world events and social and economic conditions that led to the English colonization of America and the formation of the Virginia Company that sponsored Jamestown with a goal of earning its investors a profit. Learn about the land and lifestyle of Algonquian-speaking tribes in coastal Virginia under the powerful leader Powhatan and about the culture of the first documented Africans in Virginia, who were from the kingdom of Ndongo in Angola. Outdoor living-history areas bring the 17th century to life. The Indian Village demonstrates the Powhatan way of life from hunting, farming and fishing to housing, clothing and food.

At the museum pier, board the Susan Constant, Discovery and Godspeed, replicas of the three ships that transported the original Jamestown colonists to Virginia in 1607. A riverfront discovery area provides information about European, Virginia Indian and African economic activities associated with water including navigation, boat building, fishing, commodities and trade. The re-created James Fort interprets the settlement during 1610-1614, reflecting its military and commercial character. Wattle-and-daub structures with thatched roofs represent dwellings, work spaces and public buildings. See a “settler” load and fire a matchlock musket, a blacksmith forge tools, or a carpenter work with wood. 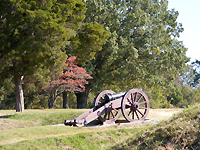 See where American independence was won at the Yorktown Battlefield, a National Park Service site. Today, Yorktown remains much as it was during the waning days of the Revolution. Earthworks and siege lines mark positions of British and American Troops, cannons stand ready behind the embattlements, and Surrender Field is a silent reminder of English General Cornwallis’ capitulation. Explore the 18th-century homes of Augustine Moore, where the terms of surrender were negotiated, and Thomas Nelson, Jr., a signer of the Declaration of Independence and commander of the Virginia militia. Visit the Yorktown Victory Monument, commissioned by the Continental Congress in 1781 and completed in 1884 to commemorate the victory at Yorktown.

See Cornwallis’ Cave, where legend has it that the English General and his staff sought refuge from the bombardment by American and French Troops. Other sites of interest include the Custom House, built in 1720 and the Poor Potter Site which preserves the remains of the kiln used by William Rogers as early as the 1720s to produce pottery that rivaled English quality. 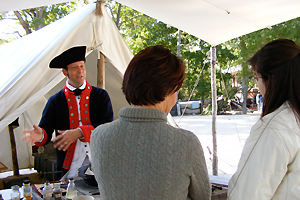 Gain a new appreciation and understanding of our nation’s beginnings at the Yorktown Victory Center where America’s evolution from colonial status to nationhood is chronicled through a unique blend of timeline, thematic exhibits and outdoor living history areas that emphasizes the experiences of ordinary people. In an outdoor re-created Continental Army encampment, historical interpreters depict the daily life of a soldier and you may be asked to help prepare a cannon for firing or join a military drill. A re-created 1780s farm provides a look at how many Americans lived in the early years of our nation.

Visit the crop field and tobacco barn and learn what was cultivated to provide an income. Explore the house and separate kitchen for a glimpse of domestic life, and try your hand at hoeing the garden or “breaking” flax. 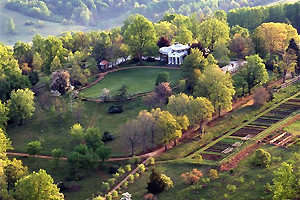 Monticello, located near Charlottesville, Virginia, was the estate of Thomas Jefferson, the principal author of the United States Declaration of Independence, the third President of the United States, and founder of the University of Virginia. The house is of Jefferson’s own design and is situated on the summit of an 850-foot-high peak in the Southwest Mountains south of the Rivanna Gap. Monticello was designated a World Heritage Site in 1987, an honor it shares with the nearby University of Virginia.

Back to top
mobile desktop