How Well Do You Know Your History? 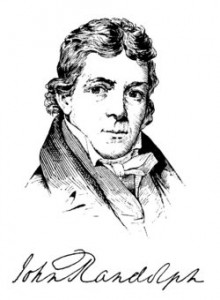 John “The Tory” Randolph and his brother Peyton Randolph were born in Williamsburg, VA, into one of the most prominent families in Virginia. John was very close friends with his cousin, Thomas Jefferson. John was one of Virginia’s best-trained attorneys, and he climbed the ladder of civic responsibility toward authority. He became a member of the city’s council, and then a burgess for the College of William & Mary. When his older brother Peyton was elected speaker of the House of Burgesses, John took his place as the colony’s attorney general. Peyton went down the road to rebellion, John did not follow. John arranged a journey across the Atlantic to England for himself, his wife, Ariana, and their two daughters, Susannah and Ariana. His son, Edmund, stayed behind and joined the American army. When John died in Brompton, London, in 1784, his last request was to be returned and buried in Virginia. His remains were returned and he is laid to rest beside his father and brother in the family vault in the chapel at The College of William and Mary in Williamsburg.

Take a moment to think about what time period this was. There were no air planes or air-tight caskets. His body was shipped on a boat from London to Virginia – but how was his body preserved? Take a guess! The results are surprising.

Answer: He was pickled in rum! And what do you think they did with the rum when they took the body out? I would assume it didn’t go to waste…!

previous post Williamsburg's First Eco-Toursim Destination
next post What IS the Cure for the Refractory?
Back to top
mobile desktop